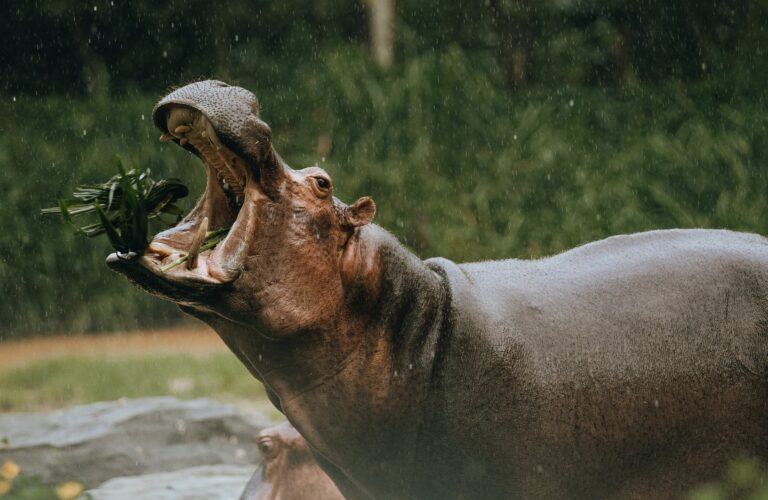 Hippopotamuses enjoy the water, which is why they were given the moniker “river horse” by the Greeks. To keep their gigantic bodies cool under the blazing African heat, hippos spend up to 16 hours a day immersed in rivers and lakes. Hippos are graceful in the water, excellent swimmers, and can hold their breath for up to five minutes underwater. They are, however, frequently large enough to walk or stand on the lakebed or lie in the shallows. They can see and breathe while mostly submerged because their eyes and nostrils are placed high on their heads. Are Hippos vegetarian?

The hippopotamus has always been hunted by humans. On the one hand because of its resistant skin, from which whips are made, for example, and on the other because of the ivory of its teeth. However, the loss of habitat has become a major problem for the animals: the grasslands needed for the animals are being converted to agriculture, which has a negative impact on the hippo population.

However, hippos are also dangerous for humans. Especially mothers with their young can be very aggressive. In the Senegalese village of Gouloumbou, 25 fishermen have been killed by hippos over the past 10 years, many others have been injured and are afraid of the animals.

They are predominantly herbivores and feed on different types of grasses, less often on aquatic plants and on plundered crops.  The hippopotamus exhibits complex social behavior. Do hippopotamuses eat meat?

A German photographer gets pictures of a hippo hunting. Just one case? Vegetarians may suffer silent agony when they see the photos of German wildlife photographer Uwe Skrzypczak, which have just been published on the Internet. Despite the fact that its species belongs to the herbivores, a hippopotamus hunts two poor wildebeest calves, kills them, and partially eats them. 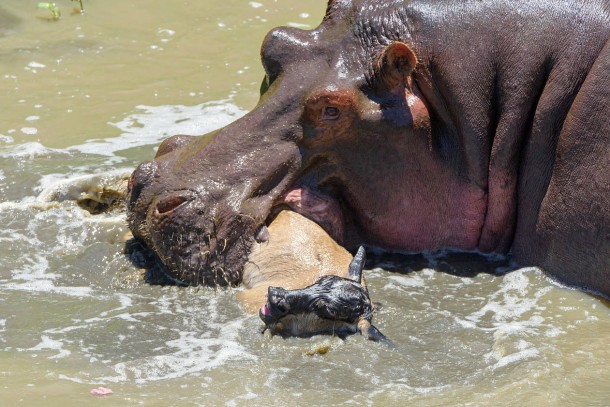 Hippos are not staunch vegetarians

Conversely, some species that do not belong to the herbivores have a digestive system similar to the herbivores. Representatives of the baleen whales, for example, which are close relatives of the hippos, have a complex pre-stomach that supports fermentation processes in the intestine. However, the sea giants feed mainly on animal plankton.

Perhaps it is not the functioning of the digestive tract that forces herbivores to abandon animal food: Joseph Dudley and his colleagues are more likely to assume that herbivores generally do not eat meat because they are mechanically incapable of doing so. Their teeth are simply not designed to crush animal bodies or their muscle mass. But this is exactly what makes hippos different from most other herbivores: their robust jaw bows and large canines are not only suitable for scaring off troublemakers or competitors. They can also open their mouths almost 180 degrees.