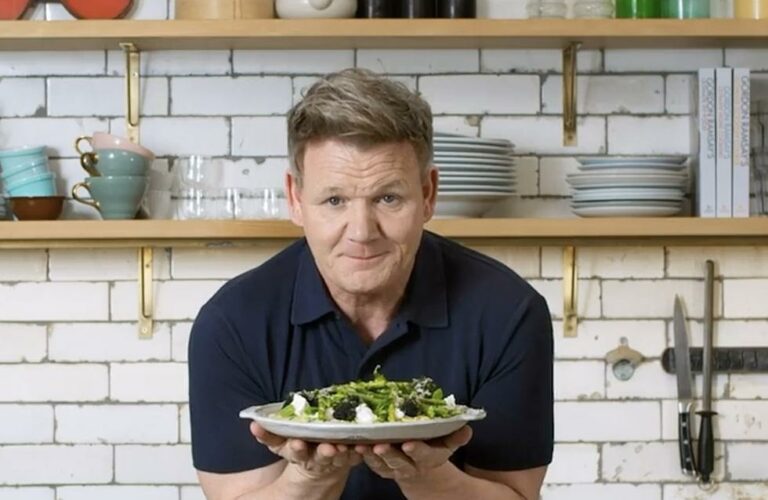 From a professional soccer player to a star chef

The well-known Michelin-starred chef was born in Glasgow, Scotland, in 1966 and grew up in England. His dream job as a child? Not chef, as one would assume. Ramsay wanted to be a professional soccer player, which a knee injury prevented him from doing when he was 18. Instead, he began a course in hotel management. But how did Gordon Ramsay become famous on television? It all started with a small documentary about the opening of his first restaurant. The film was so successful that it spawned other formats such as “Ramsay’s Kitchen Nightmares” and “Hell’s Kitchen”. However, currently, people are more interested in the question “is Gordon Ramsay going vegan?” than his tv-shows.

Gordon Ramsay likes vegan food. Ramsay started posting vegan cooking instructions on his social media accounts more recently.
The chef demonstrated how to produce crispy vegan bacon out of rice paper for use in a vegan BLT sandwich for his admirers on TikTok last year.

Ramsay recently signed on as an ambassador for a new Silk oat milk marketing initiative. The Greatest of All Time (G.O.A.T.) campaign marketed Silk’s oat milk as the G.O.A.T. milk and featured celebrity ambassadors who are G.O.A.T. The campaign was promoted on social media by Ramsay, who was dubbed the G.O.A.T. of Yelling in Kitchens.

In response to plant-based producer Julius Fiedler’s video in which he demonstrated how to make vegan tahini and miso ramen, Gordon Ramsay published a duet on TikTok on May 28, 2022. Is Gordon Ramsay becoming vegan? Fiedler began his video by saying, “That’s right,” to which Ramsay immediately responded.

Fans naturally question if Ramsay is now a vegan in real life as a result of this. The chef captioned the video with the phrase “Sometimes I can be polite to [vegans],” which gives the impression that he does not identify with vegans, even though Ramsay appeared to affirm that he was “becoming vegan” in the clip.