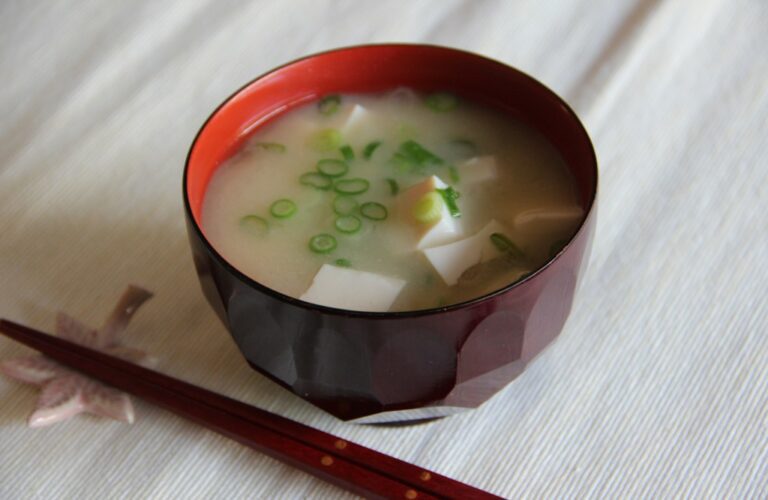 What is Miso Soup?

Miso soup is a traditional Japanese soy-based soup made from dashi, miso paste, and various additional ingredients such as seaweed or tofu. Although it is widely available at any time of the day, it is estimated that more than 70% of Japanese people consume soup for breakfast. Is Miso Soup vegetarian?

Miso soup is frequently offered as an appetizer in Japanese restaurants in the United States. The soup’s ability to alkalize the blood and stimulate the nerve system is claimed to give it therapeutic benefits.
Miso, a compound made of fermented soybeans, water, salt, and rice that has been mashed into a paste with a consistency akin to peanut butter, is the key component. Since the ingredients for Miso soup are vegetable broth, nori, chopped chard, chopped, green onion, tofu, and miso paste, Miso Soup is vegetarian. If you use bonito, the Miso Soup will be non-vegetarian.

When was miso soup invented?

Miso is centuries old and has its roots in Chiang. The fermented soybean paste was invented by Buddhist monks in China more than 2500 years ago.

Miso soup, which has been a staple of Japanese cuisine for millennia, is consumed by three-quarters of the population of Japan every day on average. During the Asuka era (592–710), miso was introduced to Japan via China, while there is also the possibility that it originated there on its own.

In Japan, cups of instant miso soup are even sold in vending machines for a little fee, which is a witness to the soup’s enormous popularity. This is because miso soup is quick and simple to make.

Where is miso soup from?

Miso soup (味噌汁, misoshiru) is a traditional Japanese soup. The soup has its roots in Japan, not China.

What is Miso paste?

Miso Paste is made by fermenting soybeans with salt and kojicin fungus. It is another essential component of Japanese cuisine. You can also include additional foods like rice, barley, millet, and wheat. It is said that miso soup makes up 80% of Japan’s miso manufacturing.

It might take anywhere from a few weeks to three years for the fermentation process to complete, producing a delicious paste that is used as a seasoning. Miso paste comes in three fundamental varieties with countless variations: white paste Shiro miso, red paste akamizo, which is fermented for a longer period of time and has a milder flavor, and awase, which is a combination of the two pastes.

Choosing a miso paste, which is typically purchased at the grocery store, is entirely a matter of taste. You may want to experiment with many different brands to determine which one you like best.

Some Miso Soup recipes call for dashi. If you are vegan or vegetarian, do not use dashi.

Dashi is a versatile broth used in a variety of Japanese dishes, including miso soup.
It can be produced with a number of ingredients, including dried shiitake mushrooms (Hoshi-shiitake), dried kelp (kombu), dried and smoked skipjack tuna, and dried baby sardines (niboshi), and dried kelp (niboshi). Even though it can be purchased all around Japan, purists feel that only dashi produced from scratch is worth tasting and even use it to evaluate chefs.

How is Miso soup made?

Make the stock how you prefer.

Slice up the mushrooms thinly.
You can purchase nameko mushrooms either fresh or canned.
They resemble button mushrooms, and shiitake mushrooms can be used in their stead.

To make miso soup, first, soften the miso by combining it with 2 tablespoons of warm stock.
Miso will not thoroughly dissolve if you add it immediately to the stock kettle.

Over medium heat, add the miso that has been softened to the stock.
If you want the soup to be smooth, strain it.

Add the tofu, alfalfa stalks, and sliced mushrooms when the miso has dissolved and been cut into small cubes. Cook for a little time until well heated, but do not boil.