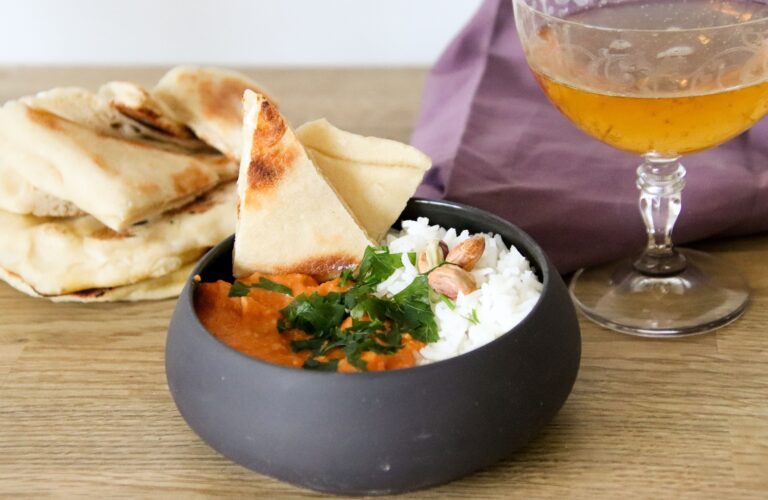 Naan is a sort of bread that is commonly served as a side dish to hot foods in South Asia (India, Pakistan, Bangladesh), Central Asia (Afghanistan, Uzbekistan, and Tajikistan), and the Middle East (Iran, Turkey). Naan is baked in a flat, pancake-like shape that has been slightly stretched. The outer edge is significantly thicker and the inside portion is flat. It tastes like stick bread and resembles a pizza crust. Although kulcha is made without yeast, it is often mistaken for naan. Is naan vegan?

Unlike other Indian breads, naan is traditionally made from leavened dough, for example by adding yogurt or with the help of lactic acid bacteria and possibly yeasts. An alternative is to use baking powder. Yeast and millet were the original staple components, although today wheat is frequently used instead. The dough is typically made from maida that has been thoroughly refined or atta. Since the original recipe includes yogurt, naan is not vegan.

Foods for the production of which wheat flour is used are almost never low carb. Since naan consists almost exclusively of wheat flour, naan is not low carb. Besides that, many studies show that wheat flour is not healthy. You should consume wheat flour as less as possible.

Can naan bread be frozen?

Yes! Naan bread can be frozen and is still ok to consume after thawing. The ability to freeze Naan bread dough for later use is quite helpful when creating large batches of the bread because it will save you time and energy.

When was Naan invented?

The best thing about Indian food is that it has an extensive vocabulary of delectable dishes, all of which are highly addicting. Take flatbreads, for example. They have their own distinct personality and fan base despite being the ideal (and required) complement to any dish.
Any of our flatbreads—I’m talking about roti, chapatti, paratha, naan, or kulcha—can be quickly transformed into a roll, taco, or burrito with as little filling as a generous layer of ghee (clarified butter), cream, sugar, etc. Naan is the most well-known Indian bread. When was Naan invented?

The Indo-Persian poet Amir Kushrau’s memoirs include the earliest known history of Naan, which dates this leavened bread to around 1300 AD. Then, naan was prepared as naan-e-tunuk (light bread) and naan-e-tanuri at the Imperial Court in Delhi (cooked in a tandoor oven). The ruling class in India enjoyed eating Naan with keema or kebab for breakfast starting about 1526 during the Mughal Empire.

Naan is traditionally made with wheat flour, which is not gluten-free. However, you can find recipes for gluten-free versions of it.

How is naan made?

Naan bread is a soft yeast flatbread from India that is traditionally cooked in a tandoor, a clay oven shaped like a chimney pot.

White or whole wheat flour is combined with active dry yeast, salt, and water in a basic naan preparation. After a brief period of kneading, the dough is laid away to rise for a period of time. The dough is divided into balls (each weighing around 100 g or 3.5 oz), which are then flattened and fried.

Due to its kneading method and usage of yeast, which at the time was restricted to the wealthier portion of society, Naan remained a delicacy that was made in royal and noble houses for the majority of glorious independent India. Even though there are only a few references of naan reaching the average person by the end of the 1700s, naan remained and still is a specialized technique that only a select few knew about and even fewer could perfect.